In recent years, increasing numbers of patients have come to Dr. Mireas for revision rhinoplasty (or else secondary), i.e. surgery to correct failed procedures performed elsewhere. Revision surgery corrects unsightly results, mistakes and/or omissions after one or more failed rhinoplasties, restoring the appearance and functionality of their nose. 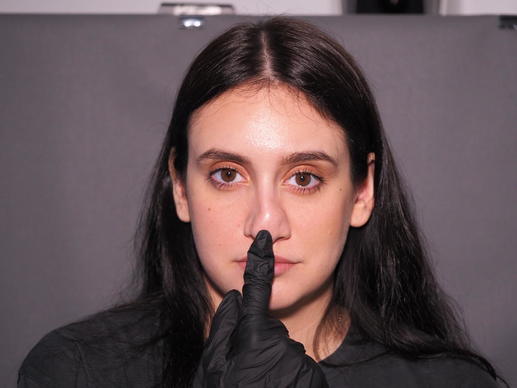 The previous surgery is sometimes so obvious that a corrective procedure is the only option, for example when a misshapen nose is not only unsightly but also impedes the natural movements of the face, for example when smiling, laughing, frowning or crying.
Georgia had revision rhinoplasty after previously unsuccessful plastic surgery on her nose. She was unhappy with the result of the earlier procedure because her nose was crooked and needed structural support, and she had problems breathing.
revision rhinoplasty dr mireas vip-rhinoplasty
It also goes without saying that if a patient is unable to breathe normally following a procedure, revision surgery is mandatory and the original rhinoplasty is considered particularly unsuccessful. 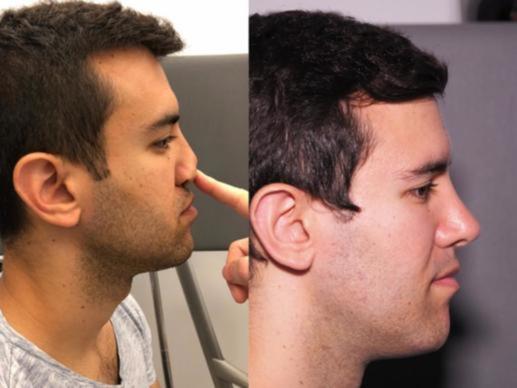 Before and after photos. 6 days post-op

There is no doubt that revision rhinoplasty following an unsuccessful procedure is more difficult than primary (first-time) rhinoplasty.
Just think how much easier it is to make something from scratch than it is to fix something that is damaged and doesn’t work properly.
That’s why revision rhinoplasty, also known as secondary rhinoplasty,  is a procedure that must be carried out by a skilled and experienced plastic surgeon specialising in rhinoplasty and ENT surgery.
Dr. Mireas gives us some useful information about nose job revision surgery
·       Dr. George Mireas, MD-PhD is an internationally recognized ENT Surgeon specializing in Rhinoplasty & Facial Plastic Surgery, and has extensive experience in revision rhinoplasty procedures.
·       He was the first surgeon to bring the piezo system, a device specially designed for ultrasonic rhinoplasty to Greece and has used it for all his operations since 2017.
·       He learnt the technique in Paris and Hamburg from its international pioneers and has established himself as the leading Greek practitioner of ultrasonic rhinoplasty.

Especially when there are serious problems that need correcting and revision rhinoplasty is potentially difficult, things are now much better than they used to be because: 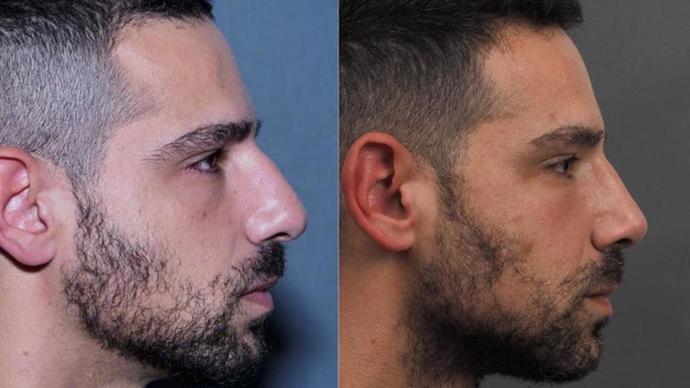 Before & 3 years after revision rhinoplasty
The new ultrasonic rhinoplasty technique allows the surgeon to sculpt the bones without having to break them.
·       Bones that have set crookedly after a previous procedure can be corrected with absolute precision.
·       It is also easy to shape “moving” bones.
·       It is even possible to operate in the case of a very recent blow to the nose and multiple asymmetrical fractures causing major deformity.
·       The ultrasonic technique is much safer, offers a more predictable result, significantly reduces the likelihood of undesirable postoperative effects such as swelling and bruising, and speeds up recovery.

Failed rhinoplasty: Common errors and how to correct them

The general aims of revision rhinoplasty are the same as for the primary procedure, but there are often limits on what can be achieved because of the problems caused by the original surgery.
Some of the errors sometimes made in unsuccessful rhinoplasty surgery.
·       Not enough cartilage or bone has been removed in the first operation. In this case, additional cartilage or bone is usually removed.
·       A graft may have become displaced. Repositioning it or a new graft in the correct position may solve the problem.
·       Too much bone or cartilage has been removed. In this case, what remains has to be moved to a new position, immobilized, and supported so that the missing part is restored, or grafts have to be used. 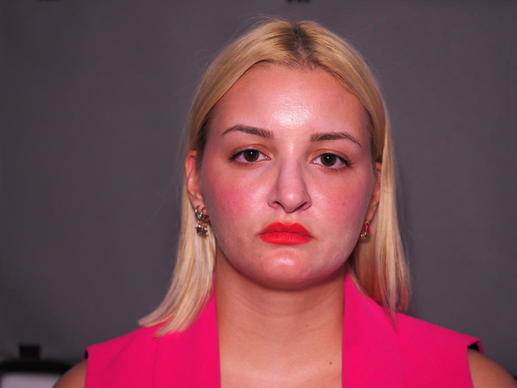 Photos of a patient after a failed rhinoplasty. Crooked nose – Lack of support 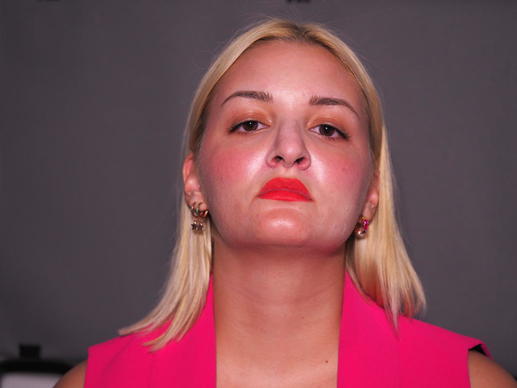 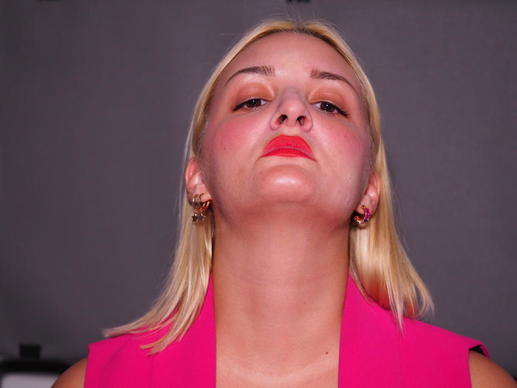 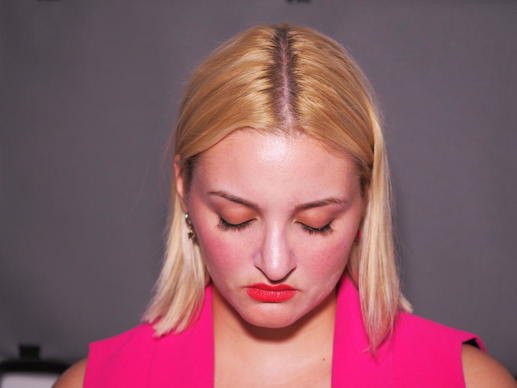 Revision rhinoplasty | The surgery: correcting the mistakes after a failed procedure

There may be very few stages required for revision rhinoplasty or a large number.
A number of these various possible stages are listed below. Because every patient is different, the right combination of stages has to be selected in each case.

·       Small incisions inside both nostrils (invisible postoperatively) and in the case of open rhinoplasty, the joining of the incisions under the nose.

·       Strengthening the lower part of the nose in the case of nostril collapse after breathing in sharply.

·       Increasing the size of the internal nasal valve in the case of a very narrow nose, in order to correct breathing difficulties and so that when seen from below the nose forms an equilateral triangle.

·       Taking grafts from the following areas (in order of priority): septum, other parts of the nose, ears, ribs.

·       Removal of a crooked/deviated septum or straightening if required.

·       Closure of incisions with absorbable sutures (in open rhinoplasty, the outside incision underneath the nose is closed with 3 tiny stitches).

The main things you need to know about secondary surgery:

Duration of the procedure

The duration of the rhinoplasty depends on the type of problem. It might last from 45 minutes to more than 3 hours in cases where a number of grafts have to be taken from other regions.

Stay at the clinic

You will be able to leave six hours after the operation. If other procedures are performed at the same time, such as genioplasty or uvulopalatopharyngoplasty , you will stay overnight and leave the next morning.

Your revision rhinoplasty is permanent and your new nose will last a lifetime.

Combining with other procedures

If there are functional problems to do with nasal breathing, then the nasal septum can be straightened and the concha can be cauterized at the same time. This is functional revision rhinoplasty.
To deal with sleep apnea and snoring treatment, it can be combined with removal of the adenoids or tonsils, uvulopalatopharyngoplasty or removal of the uvula.

Answers to patients’ most frequently asked questions about revision rhinoplasty.

How long will I have to wait before my failed rhinoplasty can be corrected?

About nine months, when the failed rhinoplasty has completely healed.

No. It is a myth that primary or secondary rhinoplasty hurts.
Just as with primary rhinoplasty, when the correct surgical technique is used during the procedure, the postoperative pain is negligible.
Patients always used to say that the most uncomfortable and painful part of the whole procedure was the removal of the gauze and cotton packing placed inside the nose during the operation.  Since he began to practice ultrasonic rhinoplasty a few years ago, Dr. Mireas has no longer had to use packing, so patients are spared the discomfort of its removal.

When can I leave the clinic after the revision rhinoplasty?

You can leave on the evening of the same day or the morning of the next day.
Of course you can spend the night in the hospital if it is more convenient to you

How long does the facial swelling last?

Rhinoplasty typically causes light bruising that will disappear after about two weeks. Once the bruising has disappeared, the healing is about 80% complete.
The swelling and any bruises are caused when tiny blood vessels burst and blood collects in the surrounding tissue.
The pattern of swelling and bruising depends on the type of procedure (in minor operations there is no bruising), the surgical techniques used, and also the type of skin (thickness, tone, resilience) and how easily each patient bruises.

Will my surgeon have to monitor my progress after the corrective surgery?

Dr. Mireas does not use any nasal packing. which is uncomfortable for the patient, especially during removal.
cast removal after secondary surgery
Dr.Mireas removes the stitches after a secondary nose job
·       Just 6 days after the procedure, the small thermoplastic splint placed on the nose during surgery is removed. This process is completely pain-free and takes only a few minutes.
·       1 year after surgery you will have to visit your surgeon.

How long will it be before the aesthetic result of the corrective rhinoplasty is visible?

If the procedure is small – e.g. correction of a slight nasal hump – then the result will be almost completely visible as soon as the nasal splint is removed.
If there is a major deformity of the nose and more reconstruction is necessary, then it will be the same as in primary surgery:
·       When the splint is removed, in 6 days, the difference in the shape of the nose is immediately visible.
·       Over the course of about 1 week the swelling quickly goes down and the healing is about 80% complete.
·       After about 3 months the healing is almost complete.
·       After one year the nose is now strong and resilient and the results of your rhinoplasty will last a lifetime. 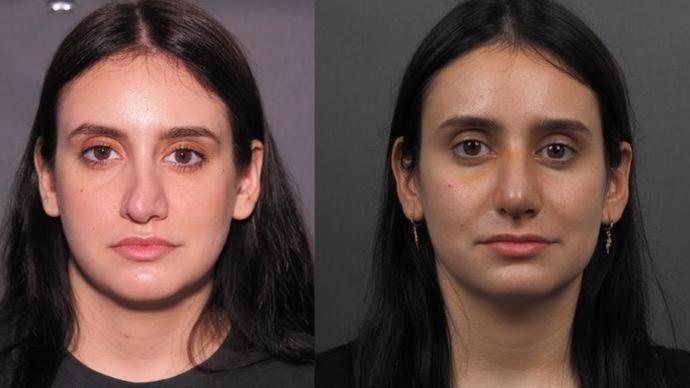 How long will it be before the functional effect of the revision rhinoplasty is visible?

What makes the VIP-Rhinoplasty Center unique

·       Rhinoplasty is a tricky procedure and requires a complete and thorough examination of the patient before the operation.
·       Only at VIP-Rhinoplasty Center can you see what the result of your rhinoplasty will look like in three dimensions with the Vectra M3 plastic surgery system of Canfield USA.
·       At VIP-Rhinoplasty Center with our on-line preparation for surgery and our medical tourism plan, we serve patients not only from Athens but from the rest of Greece, Cyprus and other countries.

·       Dr. Mireas was the first specialist ENT/rhinoplasty surgeon in Greece to use the new ultrasonic diamond rhinoplasty technique, which allows the surgeon to sculpt the bones without having to break them.

The  success of a rhinoplasty surgery  depends on choosing an experienced ENT/Rhinoplasty Surgeon, who in consultation with the patient will create a nose that blends in seamlessly with the rest of the face.
In the case of both cosmetic and functional rhinoplasty, the goal after surgery is proper breathing and facial harmony, with natural movements when speaking and smiling. The nose should also match the person’s gender, age, and personality.

See the process leading to your rhinoplasty step-by-step. From the day of the patient’s first visit to the day of the operation and then the postoperative period in video and photographs.
See videos of real-life patient testimonials